Below is my list of the 12 greatest North American Racehorses of All-Time. With any greatest thoroughbred list, there are always challenges comparing horses from different eras. Advances in veterinary medicine and travel have given the advantage to modern-era horses. But often in the early era, fields for races were much smaller. Case in point, some years the Belmont Stakes only had 3 entries. And the Kentucky Derby typically has about double the field size today as it had in the first part of the 20th Century. So I feel that it is much harder to win the Triple Crown today than in year’s past.

Consequently, I place more emphasis on the accomplishments of horses in the modern era (post 1960).  My list of greatest stops at 12 because I feel after you get past the top 10 or 12 horses, it is really hard to rank one horse over another. There are many great horses that didn’t make my list. As far which horse is the greatest of all-time, it is a toss-up between Secretariat and Man o’War–which is why I ranked them 1 a) and 1 b). Secretariat was a faster horse (see video below) but Man o’War won 95% of his races compared to Secretariat’s 76%.

1 a) Secretariat* – 1973 Triple Crown Champion, 16 wins in 21 career starts. Holds the track record for all 3 Triple Crown races as well as the North American record for 1 1/2 mile races on dirt (2:24). Also was 1973 American Male Turf Champion. ESPN’s Greatest Horse of the 20th Century. His 31-length victory in the 1973 Belmont Stakes ranks as the most impressive performance by a horse of all time. Bio Video

1 b) Man o’War  – He won the 1920 Preakness  and Belmont Stakes but wasn’t entered into the Kentucky Derby because his owner Samuel Riddle didn’t believe that a horse should race a 1 1/4 mile race that early in the year. Overall, Man o’War won 20 of his 21 career starts. He finished 2nd in his only non-win to a horse called Upset that prompted use of the term in sports. He won the 1920 Lawrence Realization race by 100 lengths. Voted Associated Press #1 horse of the Century. Sports Illustrated Horse of the Century. Man o’War’s funeral was broadcast on radio. Bio Video

3) American Pharoah* – 2015 Triple Crown Champion, the very first Grand Slam winner. 9 wins in 11 career starts. American Champion 2-Year-Old Male (2014) and he will undoubtedly will win 2015 Horse of the Year. Considering that he produced a career best Beyer Speed Figure of 120 in his last start in Breeders’ Cup Classic, I think he would have been even better as a 4 year-old. As far as recent Triple Crown winners, I rank him below Secretariat but above the next best Seattle Slew because Seattle Slew followed up his Triple Crown win with a 4th place finish in the Swaps Stakes. American Pharoah followed up his Triple Crown by winning the Haskell Invitational. Since most Triple Crown winners and even those who nearly miss are immediately retired to the stud farm, you have to project out how you think they would fare as a 4 year-old. American Pharoah projects out just fine.

4) Citation* – 1948 Triple Crown Champion, 32 wins in 45 career starts. The first horse to eclipse $1 Million dollars in career earnings. One of three major North American thoroughbreds (along with Zenyatta and Cigar) to win at least 16 consecutive major stakes races. He won 27 out of 29 starts before sitting out his 4 year-old campaign due to arthritis. Bio Video 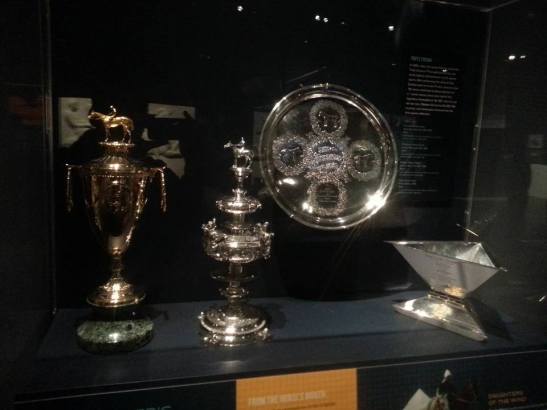 7) Native Dancer – Horse of the Year in 1952 and 1954. The first thoroughbred television star. 20 wins in 21 career starts. Won 1953 Preakness Stakes and Belmont Stakes. His only non-win was a 2nd place finish in the 1953 Kentucky Derby where he was bumped twice and lost by a head to Dark Star whom he had beaten as a 2 year-old.  Bio Video

9) Count Fleet* – 1943 Triple Crown Champion, 16 wins in 21 career starts. Never finished below third and all five of his non-wins came as a 2 year-old. Bio Video

10) Dr. Fagar – 18 wins in 22 career starts. Once billed as the “fastest horse in the world.” He still holds the North American record time for 1 mile races on dirt (1:32 1/5). He is the only horse to ever win four titles in the same year (1968) when he was named the Horse of the Year, Champion Older Male, Champion Sprint Horse and Co-Champion Turf horse. Bio Video

12) Zenyatta – The Queen of Thoroughbreds and 2010 Horse of the Year. She won 19 out of 20 races. One of three major North American thoroughbreds to win at least 16 consecutive major stakes races. As a filly, she may have raced and won against inferior competition than the boys but she proved herself in the Superbowl of Thoroughbreds by winning the 2009 Breeders’ Cup Classic and then losing by a head to Blame in the 2010 Breeders’ Cup Classic–her only loss. Bio Video