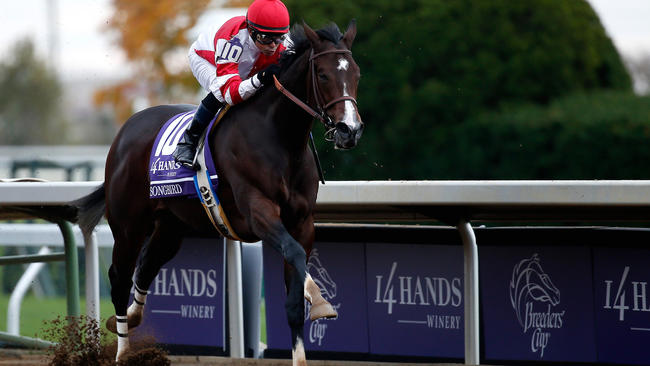 Last year, American Pharoah ended a 37-year drought by becoming 12th Triple Crown Champion. A far rarer feat in horse racing is a filly winning the Kentucky Derby. It has only happened 3 times in 141 Kentucky Derbies. Regret became the first in 1915. Then Genuine Risk in 1980 and Winning Colors in 1988 (video shown below).

So it has been 28 years since the last filly–Winning Colors–won the Kentucky Derby. This year’s crop of fillies headlined by Songbird and Rachel’s Valentina is the best in recent memory.

Entering 2016, I felt that Songbird was the best 2 year-old in 2015 regardless of gender and she showed me enough to warrant racing against the boys. Her performance and winning time in the Breeders’ Cup Juvenile Fillies race (shown below) compared to Nyquist‘s winning time at the same distance, same track on the same day in the Breeders’ Cup Juvenile race is what sold me on this filly. Songbird won with a time of 1:42.73  (Mike Smith never had to use the whip) vs Nyquist’s time of 1:43.79.  A full second faster and good for over 6 lengths. I was there at Keeneland that weekend and her race that day was the earlier one (race #3) and generally the track got faster over the course of the day.
Hall of Fame jockey Mike Smith is really high on this filly and he had contemplated retiring at age 50 until he rode Songbird. He has fallen in love all over again (I don’t blame him). Smith has ridden some great horses and especially great fillies over his career with the best being Zenyatta (see highlight video below).
Could Songbird be the best filly since Zenyatta? Zenyatta had a different style. She was a closer which matched up well on faster synthetic track surfaces that she primarily ran on. But Zenyatta did race on a dirt surface as a 4 year-old in the 2008 Apple Blossom Handicap at Oaklawn Park. Her winning time in this 1 1/16th mile race? 1:42.64. Songbird has already came within a tenth of a second (0.09 seconds to be exact) of that time as a 2 year-0ld racing against the best fillies in the world. And Mike Smith never had to show or use the whip on Songbird like he had to with Zenyatta. Songbird’s racing style is get out in front early and WIRE THE FIELD.
Songbird is undefeated in 4 starts. So what is the plan for her? Songbird’s next race is pegged to be the Grade 2 Las Virgenes Stakes against the girls at Santa Anita Park on February 6th. I feel that trainer Jerry Hollendorfer could follow a similar schedule that Winning Colors had in 1988 when she raced the following races:

If jockey Mike Smith is excited about this filly and she kept him from retirement, that is good enough for me. She is special. Keep a close eye on her in the coming months. A filly in the Kentucky Derby would be exciting for the sport. A filly with a chance at winning a Triple Crown would be pandemonium.