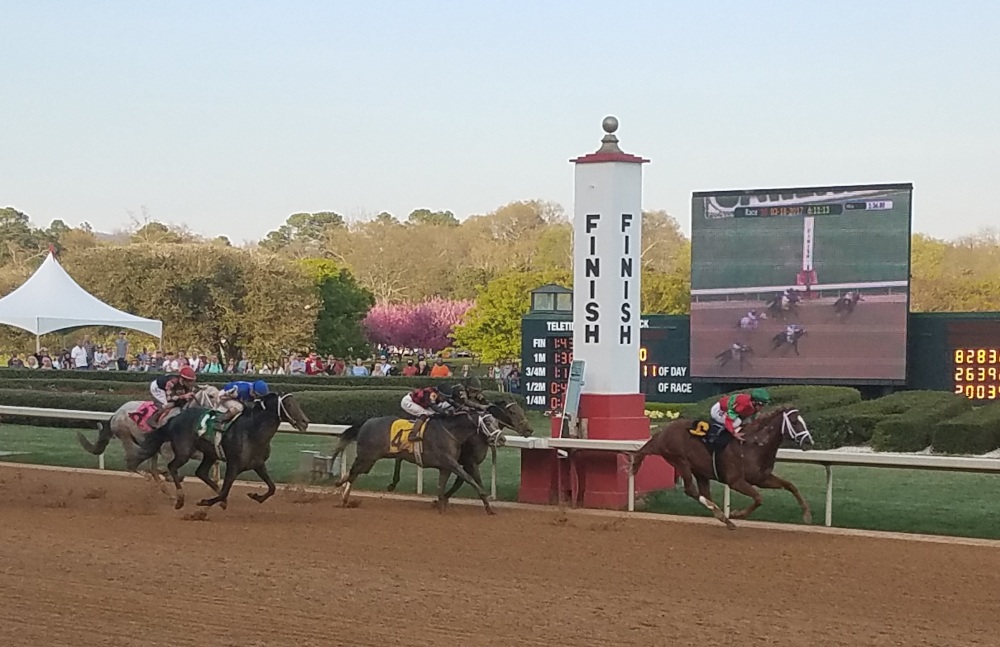 On Saturday, we get the final piece of the Kentucky Derby trail’s puzzle in the Arkansas Derby. A great matchup between the undefeated Rebel Stakes winner Malagacy and the 2-year-old Eclipse Male Champion Classic Empire.

Aside from its $1 million dollar purse and the 170 Kentucky Derby points that are up for grabs, this race race deserves your full attention as the Arkansas Derby has served as an important springboard for racing greatness in recent years.  Since 2004, in nine out of the last thirteen runnings, the Arkansas Derby produced either a winner of a Triple Crown race or the Breeders Cup Classic:

In this same time frame, the Arkansas Derby has also produced five 3-Year-Old American Male Champions: American Pharoah (2015), Summer Bird (2009), Curlin (2007), Afleet Alex (2005) and Smarty Jones (2004).  Plus two International Horses of the Year in American Pharaoh in 2015 and Curlin in 2008.  And a Triple Crown winner and the very first Grand Slam of Thoroughbred racing in American Pharoah.

As far as Derby points, the only horse in the year’s field who is assured a starting spot in the Kentucky Derby is Malagacy who has 50 points. Untrapped has 34 points and Classic Empire 32. Both will need a fourth place finish or better to assure themselves a shot in the 143rd Run for the Roses. The rest of the field will need a first or second place finish.

Below are the entries, post-position, jockeys and morning line odds for the 81st running of the Arkansas Derby.

Race Commentary: In preparation for this race, I created my own expected morning line odds and they turned out fairly close to the track handicapper’s version. I had Classic Empire at 7/5, Malagacy at 9/5, Sonneteer at 12/1 and Lookin At Lee at 20/1. However, one morning line odd that totally surprised me was Rockin Rudy at 12/1.

I had the Doug O’Neill-trained Rockin Rudy at 30/1 and have a hard time understanding the shorter odds for a horse that has primarily raced turf sprints. Especially one who also drew the dreaded rail. This is coming from someone who remembers 41-1 Danza winning the 2014 Arkansas Derby from the #1 post. Rockin Rudy has nice speed numbers in his last two starts on turf but he finished 2nd both times. He will also be stretching out from 6 1/2 furlongs for the very first time. I think he will probably be the early speed in this race much like Uncontested was in the Southwest and Rebel Stakes.

I rewatched the Rebel Stakes (shown below) several times, with the current post-positions in mind, to envision how this race might play out.

Classic Empire is starting from the #2 post–the winningest post this year at Oaklawn for distance races. Todd Pletcher’s Malagacy had the #6 post in the Rebel Stakes but this time gets the far outside post #12. I think this hurts his chances but he does have the speed to overcome a bad post-position. However, he will need to get off to a good start. In the Rebel Stakes, Malagacy did not get out of the gate well and he will have a further trip and have to deal with more traffic from the far outside post.

Overall, I will say that this race sets up well for Classic Empire if run on a dry, fast track. However, he is a bit of a risk due to unpredictable demeanor. This field has six runners from the Rebel Stakes. Many criticized the quality of the Rebel field when 112-1 Sonneteer finished 2nd. But Sonneteer used a closer strategy in the Rebel and he ran a very good race. Whether that was a good one-off performance remains to be seen. Sonneteer should get the pace he needs and will have an additional 1/2 furlong to work with.

I feel that Petrov is a pretty consistent horse who has shown a willingness to battle. I like his chances of finishing in the superfecta whether it is wet or dry. Steve Asmussen’s Lookin At Lee finished 3rd in the Southwest Stakes and 6th in the Rebel. He is a closer, who if pressed up to mid-pack sooner, could surprise. He was 11th and dead last in the Rebel Stakes at the 3/4th mile mark but finished 6th and within 4 lengths of race winner Malagacy.

Conquest Mo Money is coming off a second place finish in the Sunland Derby. Grandpa’s Dream is coming off a maiden win at Oaklawn Park in his last start. Trainer Randy Morse’s Silver Dust is a Tapit colt who finished 4th in the Southwest Stakes and 5th in the Rebel Stakes. He is a horse who may benefit from the added distance.

Donnie Von Hemel’s Rowdy the Warrior finished 9th in the Southwest Stakes and is coming off a third place finish in his last start–a one mile race at Oaklawn Park. Jack Van Berg’s One Dreamy Dude is winless in six career starts. He is coming off a sixth place finish at Oaklawn and is a very deserving of his 50-1 morning line odds.

My Prediction: Rain doesn’t appear like it will be a factor. So in a field of twelve horses, I narrowed half of the field down to the ones that I think has a chance of finishing in the Superfecta. Drum roll, these six horses are: 2) Classic Empire, 4) Petrov, 6) Lookin At Lee, 7) Sonneteer, 9) Untrapped and 12) Malagacy.

There are many questions here: 1) Will this be just like the Rebel Stakes except with Classic Empire added to field and just a reshuffling of the deck of cards? 2) According to trainer Mark Casse, Classic Empire has gained some weight but supposedly acting happy again. Is he fat and happy…fit enough physically and mentally to bounce back in form?

If we get a mature, well-conditioned Classic Empire who is ready to rumble, there is little doubt that he is the fastest horse in this field and perhaps the most talented colt in this entire class.

I would watch the lives odds. Usually three of the top four favorites with bettors in the Arkansas Derby finish in the Superfecta. Also pay attention to how Classic Empire looks and acts in pre-race.  If he acts up or doesn’t seem relaxed, this is Malagacy race to lose. That being said, I like 2, 12 over 2, 7, 12, over 2, 4, 7, 9 over 4, 6, 7, 9. A 10 cent Superfecta of this type would cost $2.90, a $1 bet would cost $29. Don’t spend more than $50 on this one, too many mysteries and uncertainties. Save your Benjamins for another day. This year’s 3-year-old races have been as unpredictable as 2-year-old races.

But if you really like longshots, Sonneteer is a closer who should get the early speed to do his thing. Last year, a closer won the Arkansas Derby in Creator. The difference this year is that there this is a faster field than last year. Last year, Creator’s winning time in the Arkansas Derby was 1:50.14. I expect this year’s winning race time will be in the 1:49 range.

My next blog will recap the Arkansas Derby and I will provide my updated Kentucky Derby contender rankings. I will have this out by Sunday evening.