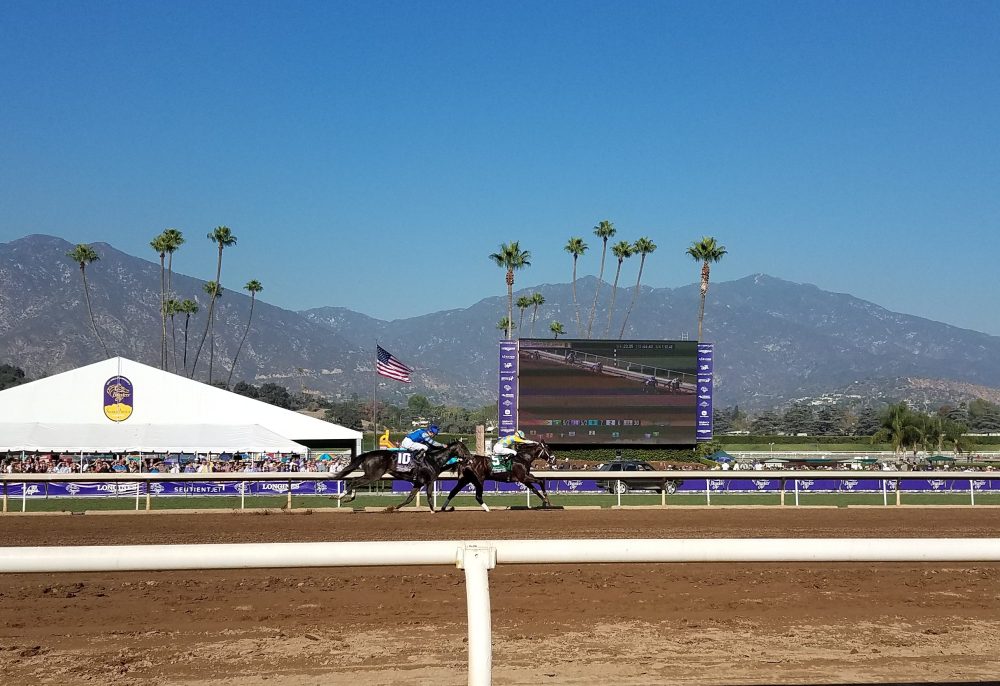 The 2016 Breeders’ Cup World Championships provided some stellar racing and the Juvenile race (shown below) arguably was the 2nd best race of the event behind the Beholder-Songbird battle in the Distaff race. In my race preview, I thought this year’s  BC juvenile would come down to Not This Time and Classic Empire. However, what I didn’t expect, is that these two would finish so far ahead of the rest of the field. Classic Empire won by a neck and Practical Joke galloped home to finish third and 7 1/2 lengths behind 2nd place finisher Not This Time.

Gormley and Klimt enjoyed the home-track advantage over the East Coast and Midwest horses. Yet both had very puzzling and unexpected poor performances finishing 7th and 8th respectively. I am not alarmed. Two year-olds often throw a mulligan in along the way and I expect both horses to bounce back in the future. However, it is now very clear entering 2017 that Classic Empire and Not This Time are the early co-Kentucky Derby favorites, much like we had with American Pharoah and Dortmund two years ago.

Below are my current 2017 Kentucky Derby contender rankings. I have only ranked five horses because I don’t feel that any other 2 year-olds thus far are on the radar of the top 2. The knee-jerk reaction would be to rank Classic Empire #1 after his big win. He would get my vote for 2 year-old Horse of the Year. But he only won by a neck and I feel that if this race had been 9 or 10 furlongs, Not This Time would caught and passed him for the win. When you rewatch the race, Not This Time got hemmed in a little behind the lead pack around the three-quarter pole and was forced to go wide to the outside.

1) Not This Time –  Dale Romans is very high on this Giant’s Causeway colt, calling him “spooky good”. He is Liam’s Map half-brother, the two sharing the same dam (mother) in Miss Macy Sue.  I feel he will get better as he stretches out past 8 1/2 furlongs.

2) Classic Empire – American Pharoah’s half-brother. Looks like his gate issues are behind him. I have been very high on the Pioneerof the Nile colt and wrote about him back in July (SEE).

3) Practical Joke – The Chad Brown-trainee has two Grade 1 stakes wins. Practical Joke is the son of Into Mischief. I have some pedigree concerns and especially beyond 9 furlongs. But for now, he is the best after the top 2.

4) Gormley – He comes from the same owner/trainer combination that produced Zenyatta. He earned a 93 Beyer Speed Figure with his win in the 2nd start of his career–the FrontRunner Stakes (shown below)–beating the race favorite Klimt.

Below are the post-positions and morning line odds for the Breeders’ Cup Juvenile race, a sneak preview of the 2017 Kentucky Derby Trail contenders. Post time is 4:43 PM CST this Saturday and the race will be televised on NBC Sports.

Overall, this is an extremely talented field and a much better crop of 2 year-olds than last year. I feel that the race could be won by as many as four horses: Not This Time, Classic Empire, Gormley and Klimt. I think Klimt will be challenged by drawing the rail. If he has the stamina, he could end up wiring this field. But I feel that the most likely winner will be either Classic Empire or Not This Time. There should be enough skepticism about both of these two horses since Classic Empire had starting gate issues two races back and Not This Time’s last race was run in muddy conditions. And starting in the 7 hole, Gormley won’t have a ground-saving trip like he had in the FrontRunner Stakes where he wired the field from #1 post  I would will probably make a boxed Trifecta bet with 4 horses: 1-5-7-10. A Boxed Superfecta or Boxed Exacta bet will be hard to hit or not pay out very much unless your outlay is large.

1) Klimt (6/1) – Owned by Kaleem Shah and trained by Bob Baffert–the same combination that produced Bayern and Dortmund. He lost to Gormley in the FrontRunner Stakes but gained valuable experience sitting off the pace as a stalker. Klimt’s sire Quality Road won the Florida Derby, Met Mile, Donn Handicap, Woodward Stakes. Quality Road suffered two quarter cracks that prevented him from competing in all three legs of the Triple Crown.

2) Syndergaard (6/1) – He lost by a nose to Practical Joke in the Champagne. This Todd Pletcher-trainee has an average Beyer Speed Figure of 88 in 3 starts. However, I am concerned that he will like distance. His sire Majesticperfection was a sprinter that didn’t race until he was 4 years old but won 5 out of 6 sprint races.

3) Term of Art (30/1) – The Doug O’Neill-trained 2 year-old will be the 2nd longshot in this race by bettors. His times are pedestrian for this very talented field. However, he is a Tiznow colt so expect him to improve as he stretches out.

4) Theory (12/1) – When it comes to the pedigree, trainer and jockey combination, Theory is probably the most attractive 2 year-old colt. Trained by Todd Pletcher who won the 2010 Kentucky Derby with Super Saver. Ridden by jockey John Velazquez who won the 2011 Kentucky Derby on Animal Kingdom. Theory has raced twice at the 6 furlong distance and received 85 Beyer Speed Figures for both races. His sire Gemologist went undefeated in five starts heading into the 2012 Kentucky Derby where he finished 16th.

5) Classic Empire* (4/1) – American Pharoah’s half-brother. Looks like Blinkers On helped him through his gate issues in the Claiborne Breeders’ Futurity. I have been very high on the Pioneerof the Nile colt and wrote about him back in July (SEE). He is right where I thought he would be after his hiccup in the Hopeful Stakes.

6) Three Rules (8/1) – He has owned the 2 year-old races at Gulfstream Park thus far and is the current winnings leader for 2 year-old colts at $680,640. His sire Gone Astray never raced further than 9 furlongs and his biggest win was the 2009 Pennsylvania Derby. He appears to be the early favorite for the Florida Derby.

7) Gormley* (5/1) – He comes from the same owner/trainer combination that produced Zenyatta. He earned a 93 Beyer Speed Figure with his win in the 2nd start of his career–the FrontRunner Stakes (shown below)–beating the race favorite Klimt. So far, this is the highest Beyer Speed Figure for a 2 year-old at more than a mile distance. My only concern is, he probably won’t be able to run like he did in FrontrRunner Stakes and win a 10 furlong race. But give him credit, he used the rail post to his advantage and didn’t tire at the end. Expect many more Gormley vs Klimt battles on the west coast in the future.

8) Star Empire (30/1) – The British colt has never raced further than 7 furlongs. He finished 2nd to Theory in the Futurity Stakes shown below. He will be the longshot in this field with live odds greater than 30-1.

9) Practical Joke* (6/1) – The Chad Brown-trainee now has two Grade 1 stakes wins. His time of 1:34.68 in the Champagne Stakes was a great time, even considering that this was a one turn race. However, like Syndergaard whom he beat by a nose, neither have competed in a two-turn race thus far. This is why both weren’t ranked higher in my previous rankings. Plus, East Coast colts haven’t fared as well as their West Coast counterparts the past few years on the Derby trail. Practical Joke is the son of Into Mischief. I have some pedigree concerns and especially beyond 9 furlongs.

10) Not This Time* (7/2) –  Dale Romans is very high on this Giant’s Causeway colt, calling him “spooky good”. He reminds him of his half-brother Brody’s Cause. He is also Liam’s Map half-brother, the two sharing the same dam (mother) in Miss Macy Sue.  He has won his last two starts by nearly 19 lengths and seems to be able to kick it into a higher gear with great acceleration in the final couple of furlongs. We probably won’t get the full understanding of what he can really do until he races against some stiffer competition.

11) Lookin At Lee (20/1) – Steve Asmussen’s best 2 year-old colt thus far. He has finished 2nd in his last two starts to Not This TIme and Classic Empire.