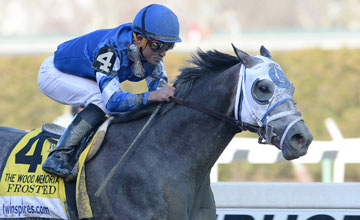 After setting a track record at Medyan in February for a 1900 Meter race, Frosted set yet another record on Saturday in the Metropolitan Handicap (shown below) with a event record time of 1:32.73. This is a significant accomplishment for two reasons. First, the 2016 Met Mile was the 124th running of race that was first run in 1891. Secondly, his time of 1:32.73 was just 0.53 seconds off the World Record for a dirt mile (1:32.2) set by Dr. Fagar in 1968. But Frosted is known as a horse who likes distance and had he been running in a 1 1/2 mile race on Saturday, he may have had a shot at breaking Secretariat’s world record for mile and a half that I will discuss later.

The Godolphin Racing 4 year-old didn’t have the most perfect trip being forced wide to make his move at the 3/4 pole but still won by a tractor-trailor length (14 1/4 lengths). This was really a jaw-dropping performance since Frosted has never been viewed as a “miler”. This race was really just a tune-up for the Tapit grey colt on his path to the Breeders’ Cup World Championships this fall.

Below are the fifteen Beyer Speed Figures that rank above Frosted’s 123 since Andrew Beyer began assigning them in the mid 1970s. Ghostzapper, who has two BSFs in the top 15, won the 2005 Met Mile with a time of 1:33.20 and received a Beyer Speed Figure of 122 for his performance.

Note: Andrew Beyer speculated that had his figures existed in 1973, Secretariat would have scored 139 in his classic 1973 win at the Belmont Stakes.

Did Frosted have a shot at the world record for 1 1/2 Mile?

Frosted is a horse whose pedigree and history suggests he likes races 1 1/8th mile or longer. He finished 2nd to American Pharoah in last year’s Belmont Stakes. Secretariat still holds the world record for a 1 1/2 mile race at 2:24 set in the 1973 Belmont Stakes (shown below). Secretariat’s fractional time at the mile mark in that race was 1:34.20. Had Frosted been entered in the 1 1/2 mile Brooklyn Invitational race instead of the Met Mile on Saturday, all Frosted needed to do was run another 1/2 mile in 51.26 seconds to break the world record. He ran the final 1/2 mile in last year’s Belmont Stakes in roughly 49.1 seconds while American Pharoah ran it in 48.66 seconds. The “rabbit” in this year’s Belmont Stakes and leader at the mile mark–Gettysburg–ran the last 1/2 mile in roughly 52 seconds flat.

It is interesting to speculate but I believe Frosted would have been in the mix for another world record had he been entered in the Brooklyn Invitational instead of the Met Mile this past Saturday. At the very least, I am confident that he would have broken that event’s record time of 2:26. 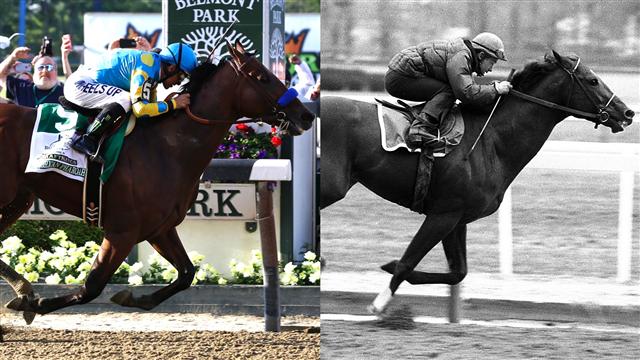